Last night at dinner, Penelope told us she’s off from school Monday because it’s Malu King Day. We worked with her a few times, and were able to get her to pronounce his name correctly by saying, “It’s Martin, like Martin Kratt from the Kratt Brothers.” Hey, whatever works!

She said: “He lived a long time ago. Before anyone was born.” When I told her I was three when Dr. King died, well, she looked at me like I was 263 years old. And while I may look that age by the time Friday night rolls around, I certainly don’t feel it. Penelope wanted to see Dr. King, so I uploaded a slice of a YouTube video of his “I Have a Dream Speech.” The video lasted about 90 seconds, which I figured was about the attention span of a four year old, but her eyes were glued to the screen. When it finished she wanted to watch another video (she pointed to a postage-stamp-sized square of Dr. King’s final speech in Memphis). 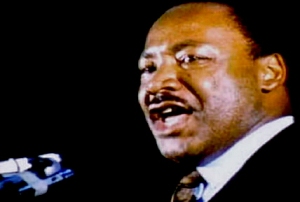 We listened to Dr. King’s soaring words. : “And so just as I say, we aren’t going to let dogs or water hoses turn us around . . .”

“Dogs?” Penelope turned around and looked up at me.

I hesitated. “Well, you know how there’s that scary dog down the corner? He means dogs like that.”

Her head swiveled back to the video. When the speech ended, the video flashed to a grainy black-and-white photograph of a motel balcony in Memphis. Then the CBS eye and words “Special Report” flashed on screen. A smooth-skinned Dan Rather announced that Martin Luther King had been killed. I knew what was coming next.

I struggle when it comes to explaining to her the darker hours of our history and inhumanity. Our nation’s history sparkles with great moments, but is also littered with great tragedies. I wonder, what is the correct age to start teaching your child about these darker moments. Any ideas?

For now I want my little girl to enjoy her innocence of the meanness that lurks in this world. “It was a terrible thing that happened, Pop Tart. And someday, when you’re a bigger girl, we’ll talk about it.”

She nodded, and turned back to the computer just as the screen faded to black.

After dinner we drove to Buckingham Friends meeting to hear the St. Thomas Gospel Choir perform. As we settled onto the stiff wooden benches of the meetinghouse, I glanced around the room. The choir members, dressed in white shirts and jeans, were huddled on the far side of the room, perhaps in prayer or in preparation for their performance. The musicians were tuning their instruments. Friends greeted one another, and several children giggled as they clambered among the back benches. Penelope watched them wistfully, and asked if she could join them. We agreed, and told her it would be time to return when the choir members took their places to sing. She hesitated a moment, suddenly uncharacteristically shy, but Bern coaxed her. “Don’t be afraid, go ahead.”

It didn’t take long. Within minutes, she was giggling right along with two other children: a blond-haired, blue-eyed girl; an African-American toddler; and my Asian daughter.