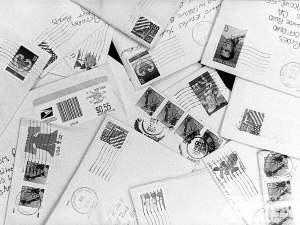 A few months shy of the third anniversary of my Dad’s death, my sister, brother and I gathered in the house my Mom plans to sell. We met to clean out my Dad’s art room. Toward the end of World War II, my Dad illustrated cartoons for Stars & Stripes Magazine — he also served in an Artillery Brigade on Okinawa — and for decades he worked as a technical illustrator for a printing-press manufacturer.

In the years before the term “man cave” was invented, my Dad had one. This particular “cave” was filled with Marty Robbins cassettes, comic books, books about comic books, and bulky Dean Martin VHS tapes. He had files and files of art projects in various stages of completion and, cut out from magazines and newspapers, photographs he intended to draw. When you start following the paper trail of a loved one, you are bound to meander down a path of surprises, and my Dad’s was no exception. I learned that after retiring, he intended to learn how to cook. The only time I remember my Dad near a stove, he was clutching a fire extinguisher and dousing a grease fire he’d started while cooking hamburgers.  But here I stood leafing through a collection of recipes from a short stack of late 1980’s Somerset Press newspaper cooking inserts.

My Dad’s presence was everywhere in the art room. I wasn’t all that surprised when the woman hired to paint the interior of the house rolled through the rooms quickly until she started working in this one. There she felt slightly unnerved, and shared her concerns with my sister. Later, the painter re-entered the room and said softly, “I’m not here to do any harm. I just want to pretty the room up a bit.” Then she finished the job.

I was cleaning out the art closet when I found a cardboard box on a shelf. I read the brief note written in my father’s strong, neat script — written before Parkinson’s Disease would strip him of his ability to draw and paint — and held it up for my sister to read. “Hmmm, oh boy,” she said.

We carried the box out to the living room coffee table, and I opened it. Inside were three thick bundles secured in thick rubber bands. I handed a packet to my brother and sister, and kept the third for myself. I carefully removed the rubber band without poking my own eye out. I balanced the pile on my lap and started to slowly leaf through the contents: Dozens of birthday, anniversary and Christmas cards my Dad had saved from Mom, us kids and the grandchildren. Notes written in loopy child-like scribbles — we must have been about Penelope’s age when we gave him some of these cards.

I glanced over at my brother sitting next to me on the couch. He was sorting through a batch of amusing notes and cards from friends and relatives that must have tickled Dad’s funny bone. Uncle Archie sent him a photo of a pumpkin-headed scarecrow sitting on a lawn chair in his front yard with a long note that began, “I’ve been sitting out here waiting for you to come visit…”

My sister had a pile of thank-you notes my father received for favors that, for the most part, I never even knew about. Teachers’ bulletin boards he decorated, a sick nun/teacher he visited in the hospital, cartoons he drew for picnics or parties: People whose lives he touched in some small way who remembered his kindness. I even found notes from the five exchange students I befriended in college who stayed at my home one spring break. Also in the package were two identical notes written in pencil on small white pieces of paper: “Be in front of Grants at 8 p.m. I’ll be there at 8:01 p.m.” The night my parents first dated, we suspect.

When Penelope gives me a drawing, or a note, or a scribble, I can’t seem to throw it out. At times, I curse my sentimentality. I’ll feel flickering moments of melancholy brush past that fill me with happiness and sadness at the same time. I may struggle with understanding why I feel that way, but I know from where it comes.

I looked again at the note Dad wrote across the top of the cardboard box: “More important than money.”

Ten years ago this month, a man my uncle barely knew walked into his home, punched him in the face and strangled him to death. He dragged his lifeless body across a cold marble floor, dumped him into a closet and locked the door.

Then he picked up the telephone and invited his friends over to the house for a party.

My Mom called me two mornings later. She recounted the detective’s story of how friends grew worried when my uncle wasn’t answering his telephone. His girlfriend and best friend drove to his home, peeked past the living room curtains and saw fast-food bags littering my fastidious uncle’s coffee table. That’s when they called the police.

The disbelief in my Mom’s voice was palpable. Or, maybe, I could not believe what I was hearing. Within hours my wife and I packed our bags and staggered into our car for the two-day journey to my uncle’s home.

While today the memories are as fresh as this evening’s news, I still struggle to understand the jumble of events I confronted that week.  The feeling of being blindfolded and drop kicked into an episode of “Dragnet” permeates the shards of images that surface:

I remember standing on my uncle’s front porch with my father. A warm sun baked my left arm; my father’s face shadowed by the porch overhang. He glared at me, his voice hushed. “You tell me everything that’s going on. Your mother doesn’t need to know. But you tell me.”

I’d been trying to shield my parents as much as possible. Spare them the gruesome details, the trauma. Much like they had spared me from life’s tragedies and horrors when I was a child.

No different from how I now shield Penelope.

But I told him; told him everything I knew. When I was finished he looked out past the front lawn, past the houses, down the street to somewhere else. To another street hundreds of miles and fifty years distant. To a boy my Dad once knew. That boy is riding a bicycle delivering newspapers in a respectable neighborhood on a chilly morning. He stops at a house and as he flips the newspaper onto the front porch, the door creaks open. A middle-aged woman purses her painted lips and comments on the chill. She scans the sleeping neighborhood for signs of life. Seeing none, she beckons him inside. . .

My father finishes his story. My eyes are still stinging when the screen door slams.

I’m alone on the porch.

But I’m not alone really. I’m standing on my uncle’s front porch, but it’s a different porch in front of a different house hundreds of miles and twenty-five years distant. There’s the smell of fresh-cut grass and an ache in my young shoulders. There are glasses of ice tea sweating on a metal tray, and my uncle is melting into a lawn chair. “You might like these,” he says, handing me a couple of paperbacks.

He’s talking, but I’m scanning the books, reading the blurb on the back and the reviews. “The Holcroft Covenant.” “Operation Skydrop.” Not exactly Hemingway but still a curiosity to a kid who’s just getting out of The Three Investigators and The Hardy Boys. These books are hundreds of pages long, small type, no pictures. Something resonates and an interest in books becomes a lifelong affair.

Since that week a decade ago, thoughts of my uncle always center around his terrible demise. He became labeled as: “My uncle, the one who was beaten and strangled to death . . .”

I realized not long ago the terrible thing I was doing. Bad enough someone had murdered my uncle; I had allowed that person to hijack my memories.

This discovery occurred as I stood in my living room before a locked bookcase which holds some of the greatest novels and poetry ever written. These books are beautiful editions; some signed by the authors. As someone who adores the classics, I treasure every book sitting on the shelves.

The books arrived in a dozen cardboard boxes about a month after my uncle’s murder. My mother thought he’d want me to have them.

As a former newspaper editor, I would have sent this story back to the reporter and told him to fill in the blanks. So, here goes: two days after my uncle’s murder, police caught the man responsible. He planned a second party at my uncle’s home. The party guests arrived at about the same time the police did. They didn’t need Joe Friday to solve this crime. They found enough evidence to send the man to the state penitentiary for a very long time. My uncle’s ashes were shipped home a few months later. In a drizzly spring chill, my uncle, the book lover, was laid to rest in the family’s burial plot.